Heathers generally don’t do very well in my garden as they don’t seem to like all the rain soaked ground in the Winter.
Personally, I’m not that much of a fan of all that continuous wet rain myself...
However, a couple of heathers that I’ve planted in a hanging basket a good few years ago, have thrived and flourished. Every year, at about this time, they have burst into some cheery colour.
This one was supposed to be a white heather when I bought it but when you look closely, it does actually have a rather attractive pink hue with a dark purple eye. I love the way the bright little flowers arch over and contrast against the tops of the dark, tall trees growing down below in the wood. 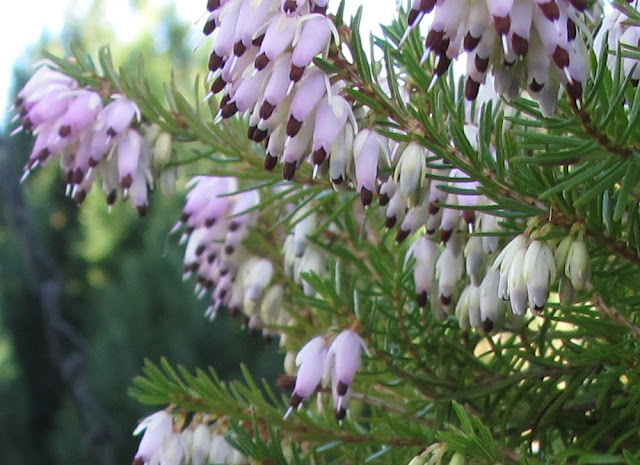 On the other side of the basket is a darker, more purple coloured heather which shows up well in front of the white wall behind. 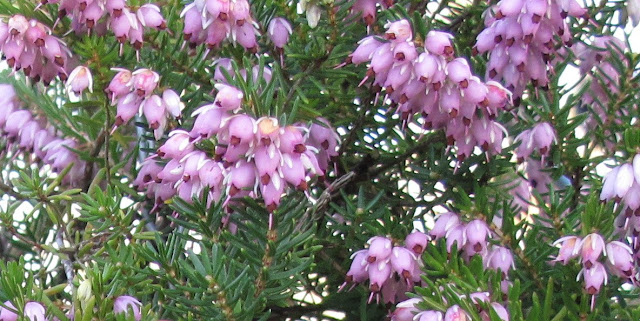 I do apologise for the slightly out of focus photos. Unfortunately I was shivering so much I couldn’t keep the camera still-really must invest in a tripod!!
It was so cold...
And then it started to snow...
Back indoors, I abandoned the plans I had to tidy up in the garden and retreated to the kitchen. Always a good place to be...
I had bought some seasonal Seville Oranges a few days previously, so needed no excuse to get out the large preserving pan and set to work to make some marmalade.
Seville Oranges are the oranges of choice for me in making marmalade. They are too bitter to eat normally but when made into marmalade they are sublime.
I love also the fact that they are only available for a very short period of time and thus we can capture a little bit of sunshine in these dark, cold, winter months.
I do think also, there is something special in having a bubbling pan of glistening orange marmalade gently boiling away and infusing the house with that heavenly scent of fruity oranges whilst outside all is crisp cold and snowy white.
I use a very simple recipe to make my marmalade so apologies to the purists. This is quick and so easy to make. Using jam or preserving sugar speeds up the process considerably.
I added some Cointreau this year as I had a bottle that had been hanging around for a couple of years and just wanted to use it up and thought being an orange based liquor it would work well in the marmalade...it did...believe me!
Homemade Seville Orange Marmalade with Cointreau
This will make about 2kg of marmalade so you will need enough sterilised jars to cope!
500g whole Seville Oranges
2 litres of water
1.5g jam sugar
2 tbsp of Cointreau
In a large preserving pan, place the 2 litres of water and the whole Seville oranges. Cover and bring to the boil and then boil steadily for about two hours, turning occasionally so each side of the orange is gently cooked.
After two hours turn off the heat and allow to cool for about 15 minutes so you can handle the oranges.
Remove each orange in turn and place in a small bowl and cut into quarters. Carefully remove all the pips, any fibrous centre and core and discard. Then with your hands squeeze each quarter of the remaining orange to extract the juice and then with a sharp knife very, very finely slice the orange. How finely you slice the oranges obviously depends whether you prefer thick or thin cut marmalade. Personally I like my slices quite thin, 1-2cm long and 1-2mm wide. This will take a little time as you go through each orange but just relax and savour the wondrous aroma as you do this...
I find doing each orange in turn in a small bowl then returning it to the large preserving pan once sliced is easiest and stops escaping pips remaining in the pan.
Once all is sliced and returned to the pan with the cooking water, add the sugar and bring back to the boil, stirring to dissolve the sugar. Once dissolved, add the Cointreau and keep at a bubbling boil for 7-10 minutes. Do keep a careful watch and sir in case it bubbles over...
Check if set by the usual jam method of placing a little on a damp plate previously placed in the freezer and seeing if the mixture wrinkles to the touch.
Allow to cool for 15 minutes. Add a knob of butter to dissolve any surface scum if required.
Carefully pour into the sterilised jars and when cool, cover and label. 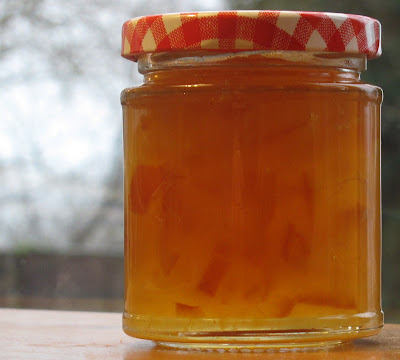 Homemade marmalade is wonderful. Shop bought varieties just do not compare...
I do relish the opportunity to make my own marmalade each year and swap the spare jars with friends who have their own different and unique flavour combinations so we can enjoy our own and each other’s marmalades throughout the year.
As soon as my marmalade is done I can’t wait to taste it. I often dip some bread in to the remaining warm marmalade lurking in the preserving pan.
Homemade marmalade is a delight indeed.
Slather your marmalade onto hot buttered toast for a sublime breakfast or for a quick tasty brunch, try spreading homemade marmalade on to a warm toasted bagel then generously topping with Philadelphia Cream Cheese-other makes of crème cheese are of course available...
A friend of mine adores marmalade and hot sausage sandwiches ...but we won’t go there...
Posted by Green Dragonette at 18:23 12 comments: 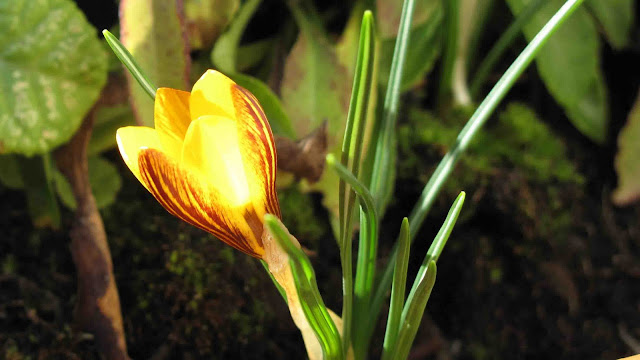 I had travelled back home to South Wales the previous evening, through quite horrid driving conditions-very heavy sleet and poor visibility. During the night, the weather had thankfully eased and turned to rain, and just before dawn the rain had also ceased and the clouds cleared.
As I awoke, I could hear the birds chattering away, and worried yet again that they might be looking for food, I went outside to resupply the bird feeders.
Thankfully no snow or even rain, but the air was crisp to say the least!
In the clear blue early morning sky, the day’s sun arose and focused her light on some of the early spring bulbs which had flowered whilst I had been away. These delicate miniature flowers simply glowed in the early bright sunlight and some still had raindrops captured on their petals, just waiting to roll off... 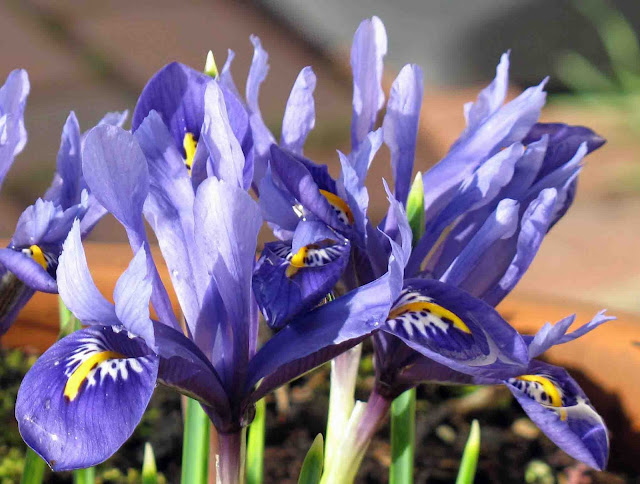 These Iris have been the first to bloom. I think they are my Reticulata ‘Gordon’ Iris which I purchased a couple of years ago from Miniature Bulbs www.miniaturebulbs.co.uk a lovely British company specialising in miniature bulbs.
I have been tempted with many of their bulbs over the last few years as I just love the delicate structure and colour of the flowers. However, because of the very wet conditions here, I have to take great care in order that the bulbs do not succumb to rot.
My best results have been those planted in containers that I keep on the front driveway which is south facing but rather ‘breezy’.
Others have been planted in the hanging baskets in the rear north facing garden. These take a few more weeks to emerge as the winter sunlight hardly rises enough around there to give them the sun’s warmth and light.
Given these growing conditions, it is truly wonderful when you do aspire glimpses of these little spring beauties... 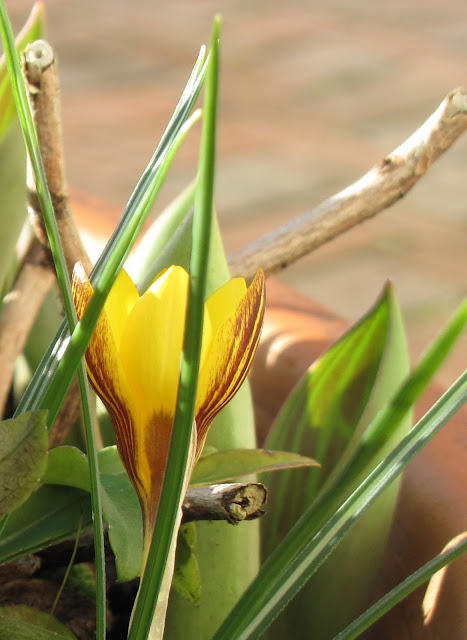 An early start to my crocus season seems to be the Angustifolius ‘Bronze Form’ and, in the background, just emerging, are the leaves of one of my early tulips.
In these days when one seems plagued by stress, it is truly wonderful to be able to stop for just a few moments and just contemplate nature...
Even a simple drop of rain water on a newly furled petal can be a thing of absolute beauty... 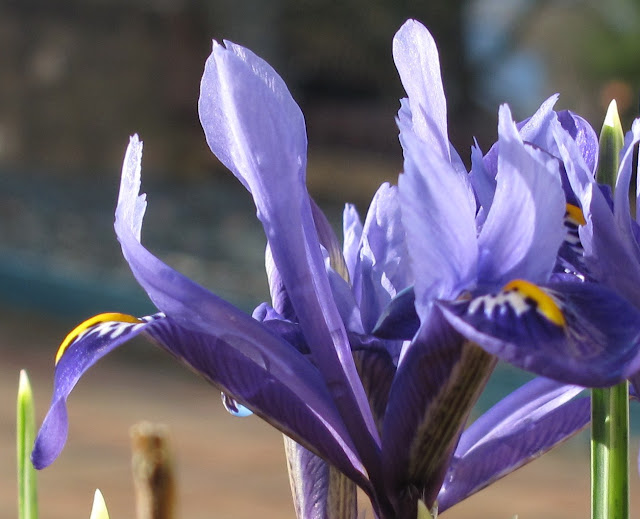 And, after the dark of Winter, these early Spring flowers can give us such wonder-if only we will take the time to look what lies beneath our feet... 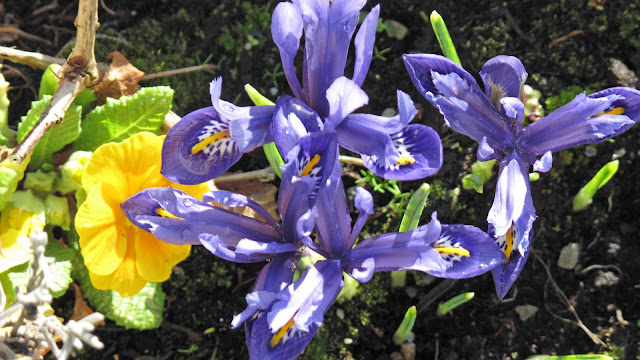 Posted by Green Dragonette at 23:38 6 comments: