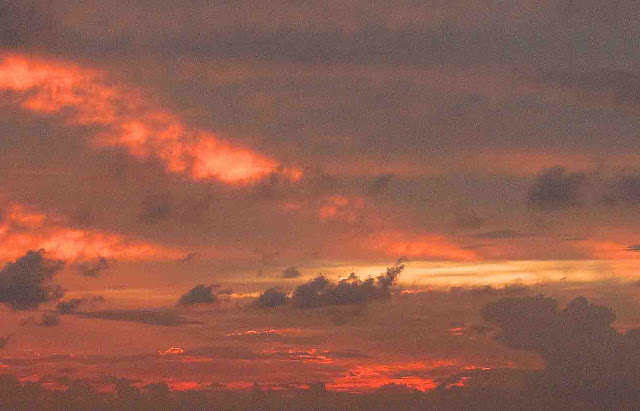 School Dinners
As I contemplate the beauties of the sunset including the photo of this one that I took this past year, I am tempted to reflect on old memories.
I know for many people looking back on their memories of school dinners, it is a time of misery...
In this day and age where the likes of Jamie Oliver are trying to enhance the idea of the school dinner, I have to say, despite all of this, I am still rather pessimistic for their future.
I do feel rather strongly that education in schools does not stop at lunchtime...
For myself though, I only have the most positive of memories. For me, attending High School in the 70’s in England, one of the highlights was the school dinner. It wasn’t until years afterwards however, that I could appreciate how lucky I had been...
Then, everything was cooked completely at the school-none of this bringing in and reheating. The kitchen was run by team of redoubtable women whom nobody-including the head teacher- argued with.
Each day saw a different menu with one salad option and two hot options plus two hot puddings and a cold pudding/cheese option.
We had about 120 pupils in each year and, as I remember, only about 6-8 children in my year brought their own lunch as the rest opted enthusiastically for the school dinners. In those days we were not allowed to go out of school for lunch, so going home or considering anything else i.e. the local chip shop, would be out of the question. Not that we would ever have wanted to!
I remember we used to scrabble to get in line once we had heard what the day’s options were...
If the aroma of cooking Melting Moments drifted around the school in the morning then pulses would raise as we knew that one of the options for pudding would be the hugely popular Giant Melting Moments Oaty Biscuits served with creamy vanilla ice-cream. And, if we heard it was going to be cheese soufflé, then scuffles would sometimes break out in the waiting queue as there was always the risk that this popular favourite would run out before we got there! That sublime, billowing cheese soufflé, served with piping hot plum tomatoes with just a touch of oregano and chunky chips perfectly crisp on the outside and fluffy in the middle, was an absolute treat and one that we didn’t get at home those days.
And then the salads...these were truly outstanding... You have to remember that in the early 70’s, salad usually consisted of a couple of lettuce leaves, tomato and cucumber and perhaps some shop bought coleslaw for that touch of extra luxury.
The school, however, had a salad bar of at least 6 large bowls with each containing a different salad combination. Each pupil could choose a scoop from however many bowls as they desired. The cook in charge of that section wanted the pupil to have as much salad and vegetables as they wanted and enthusiastically encouraged them to try the different combinations. As well as the ‘safe’ coleslaw option which was hugely better than the shop bought one we were mostly used to, being freshly made, there were bowls of other salads such as ones made with cold, brightly green broccoli and sliced hazelnuts- which we thought highly daring being a vegetable that we were used to hot, Waldorf salad with crunchy chunks of apple and walnuts in a divinely  creamy mayonnaise completely different from the salad cream we were used to at home, and a delicious pasta salad with very thinly sliced radish and orange. I remember still, going home and telling my mother we had a salad with cold pasta and her being rather upset and flustered at such a concept despite me saying how much I enjoyed it!
If anybody is reading this, then I wonder if you too have any memories of school dinners?
Posted by Green Dragonette at 18:04