Welbeck Part Two-A Tale of An Eccentric Duke And His Underground Ballroom And Glorious Jam Making And Delicious Fruit Liqueurs... 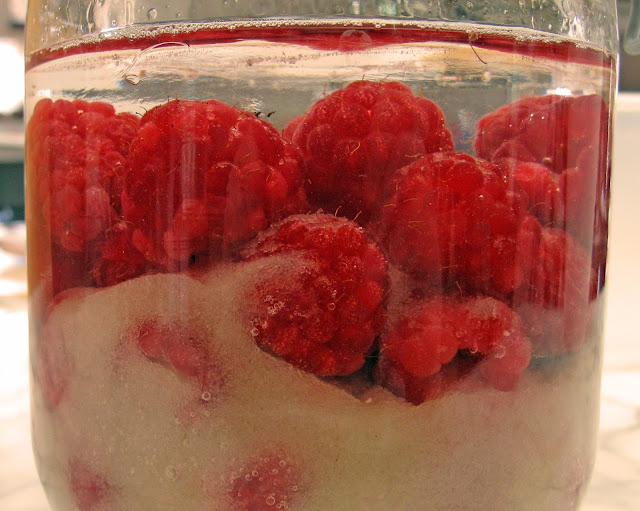 As the sun is now putting in a much overdue appearance, then the fruit and vegetables in the garden can finally romp away and grow...

The keen gardener then wants to capture all that wondrous bounty and save its deliciousness to eat later on in the year when the pickings are somewhat more sparse.

A great way of preserving fruit is by making jams, jellies and- for those that care to imbibe in a little alcoholic libation-a decadent fruit liqueur...

But first, a little tale of an eccentric Duke...

Described by all, as ‘a little introverted’, he did not encourage visitors to his vast estates.

Even his servants were instructed to not acknowledge his presence and he communicated to them by writing...even to the extent that each of his rooms each had a letter box to send and receive any written communications...

He generally ventured outside only in darkness and if he did go out by day, would wear two overcoats with high collars and carry a large umbrella which he would hide behind if addressed.

He took over the Welbeck Estate on the death of his father, the 4th Duke, and subsequently made substantial changes. Not least were the series of underground rooms and tunnels totalling 15 miles in length.

He had built various underground rooms including a Billiard room, a Library, an Observatory and a huge Ballroom which supposedly contained a hydraulic lift to carry at least 20 people to the surface.

In the main house-above ground- he retreated to just 4-5 rooms which he stripped of furniture but had a commode placed in each room in the corner...

All rooms both in his private suite in the main house and those below ground were painted in pink.

His life is absolutely fascinating and well worth further perusal...

Back to the Cookery Course... 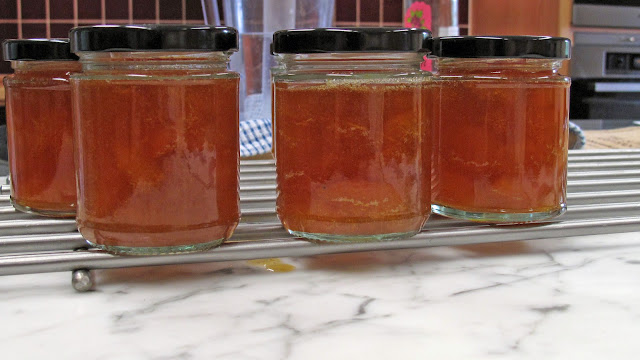 Now I have made various jams and jellies for a number of years and in more recent years some fruit liqueurs...but there is always room for improvement and consequently I signed up for the Summer Preserves and Liqueurs at The Cookery School at The Artisan School Of Food at Welbeck.

In my previous post I described the recipe for Sweet Chilli Jam.

Also on the course we made a succulent and sweet Apricot Jam and a rather delicious Recurrent Jelly. If anyone is interested in these recipes then do let me know and I’ll add it to a future post.

Jams and jellies are truly wondrous and so easy to make and then enjoy for the rest of the year... 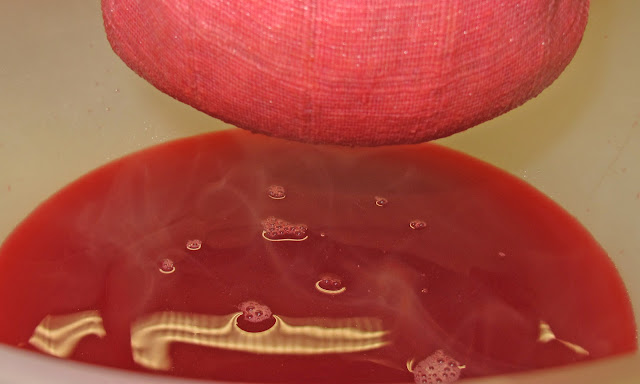 And what did I learn from the course that I didn’t know before??

I also invested in a new jam straining bag and stand that we used on the course and highly recommended it is too!- my previous one had a tendency to collapse! 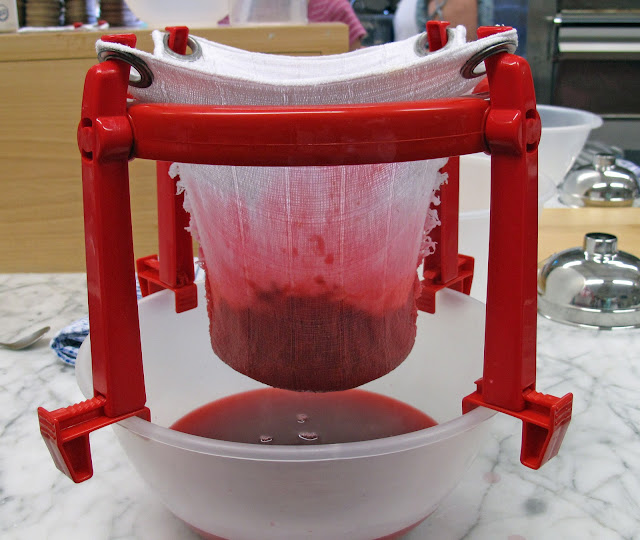 Recommended Bag and Stand from

www.amazon.co.uk/Kitchen-Craft-Jam-Strainer-Kit/dp/B000NUV0JW/ref=sr_1_2?s=kitchen&ie=UTF8&qid=1343324204&sr=1-2
and the cheap but excellent digital thermometer to give more accurate temperature guides,

And finally... the recipe for making a fruit liqueur...

Making a fruit liqueur is ridiculously easy and once made, can be put in pretty glass containers and given as very welcome Christmas gifts.

In the past I have simply thrown the quantities together and, I am thankful to say, the results have been certainly rather quaffable...

However, today I would like to share the recipe I was given on the course-just slightly tweaked by myself, for you to make your own.

Use a 1 litre Kilner jar-

Ensure the jar is clean and sterilised-I put mine through the dishwasher and then dry off upside-down in a warm oven (minus the rubber seal) until needed. Remove carefully from the oven as the glass will be hot. Once filled then add the rubber seal to the lid and close.

Wash the fruit and dry well

Mix together the fruit and sugar in a large, 1 litre Kilner jar

Pour the vodka over the fruit up to the maximum line on the jar.

Seal and store in a cool and dark place.

Gently shake every day for the first 2-3 weeks until all the sugar is dissolved.

After that, gently shake occasionally.

After 3 months, decant into smaller bottles and drink!

You can alternatively serve straight from the jar!

Don’t waste the boozy fruit but serve them with vanilla ice-cream or put them on top of a sheet of some flaky pastry, bake quickly in a hot oven and then serve with Crème Fraiche or some delicious Clotted Cream!

This recipe could be used with other fruit such as raspberries, blueberries, strawberries etc. -or a mixture of the available Summer fruit.

I cannot more highly recommend this recipe. It is so, so, easy-not really a recipe at all-but the results are amazing and absolutely delicious!!

If you decant and then bottle the results in some pretty bottles then the resulting gifts given to friends are always very, very gratefully received!

Seen below are examples of three of my homemade fruit liqueurs- Raspberry, Strawberry and Blackcurrant... 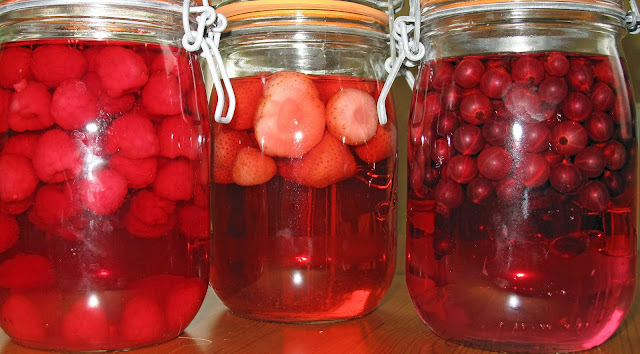 Until next time, drink wisely and well...