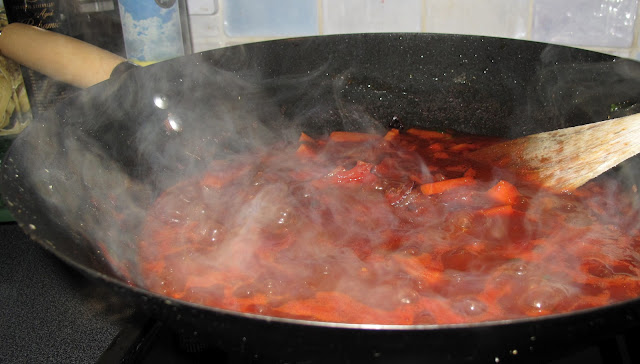 St David’s Day falls on the 1st March each year and is widely celebrated here in Wales. Saint David or Dewi Sant as he is known in Welsh, is the National Saint of Wales.
He was born in the fifth century-possibly 588 AD although the records are not absolutely clear...The legends are endless about St David.
Today, on 1st March, there will be much celebrating with parades and festivals. Locally many children attending primary school will be dressed in Welsh national costume and adults will wear a leek or daffodil in their lapel. The leek and daffodil being both emblems of Wales. 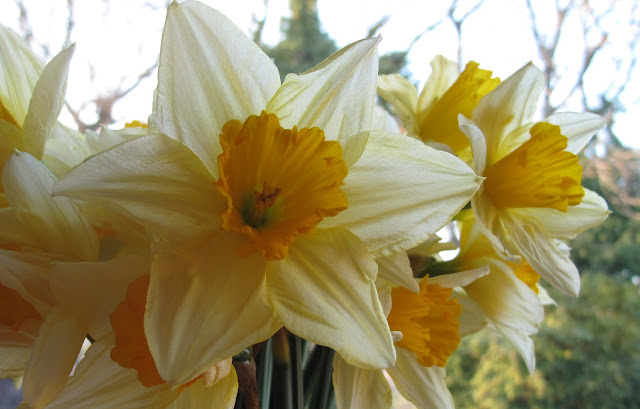 All soldiers in Welsh battalions in the British army will also wear a leek on their berets. The rest of us will probably choose to wear a daffodil!
.
Red Dragon Pie

Red Dragon Pie is one of my favourites and I feel that it deserves to be show-cased on this day of all days...
There are many recipes around for this traditional dish, and everyone will have their personal preference. For myself, I don’t like the filling to be too dry, so use more tinned tomato to keep it moist and to give it a little more oomph add a very generous amount of chilli-after all- it is a dragon pie! I used some more of my dried chillies from last year’s crop and have to say perhaps one or two of them were a bit fiery...
Red Dragon Pie actually gets its name from having Aduki beans which the Chinese call red dragon beans. I have used lots of red vegetables topped with soft mashed potato covered with grated cheese. The cheese is, of course, Welsh in origin, a mixture of the creamy Caerphilly cheese, and the ultra strong and fantastically tasty cheddar-like Black Bomber from Snowdonia http://www.snowdoniacheese.co.uk/little-black-bomber.aspx
And, after a recent post by Charles over at www.fiveeurofood.com  who suggested using a little port in his French Onion soup recipe, I thought I would try it in my Red Dragon pie. I have to say it worked, as there was a lovely richness to the flavour. Thank you Charles for the suggestion!
230g Aduki beans-tinned
400g plum tomatoes-tinned
I red onion chopped
1 large plump clove of garlic-crushed
1 large plump fresh red chilli or 3-4 dried chillies
2 tbsp of chopped fresh Thyme
1 large glass of red wine
1 small glass of port
200g of grated Welsh cheese
55g basmati and wild rice
1 tbsp of British Extra Virgin Rapeseed Oil
500g potato
1 tbsp of Marigold Stock Powder
225 carrot cut into batons
2 tbsp of Tamari (light Soy sauce)
Method
Peel the potatoes and cut into small chunks and boil until just soft. Once cooked, retain the cooking water in case it is needed later in the cooking. Allow the drained potatoes to gently steam and dry out, once dry, mash with a fork. I used King Edward which is a very nice floury potato.
In another pan, cook the rice according to the packet’s instructions until they would need just another 5 minutes more as they will continue cooking in the pie. I like to use a mix of basmati and wild rice for texture.
Heat the oven to 180C
In a large pan, fry the chopped onion and carrot batons in the rapeseed oil until lightly golden. Add the red wine and port and simmer for a couple of minutes to burn off the alcohol. Add the crushed garlic, chopped Thyme, chopped chilli, Tamari and the contents of the can of plum tomatoes and the can of aduki beans. Gently simmer for 10-15 minutes to reduce then add the cooked rice. Continue to gently simmer and reduce until nicely moist. You want it quite succulent in texture so the mixture doesn’t turn out too dry but on the other hand you don’t want it too liquidy or your mashed potato will sink! Transfer to a large casserole dish and then top with the mashed potato and then the grated cheese-be very generous with the cheese.
Place in the hot ovan and heat for 10 minutes or so until all is bubbling and golden brown... 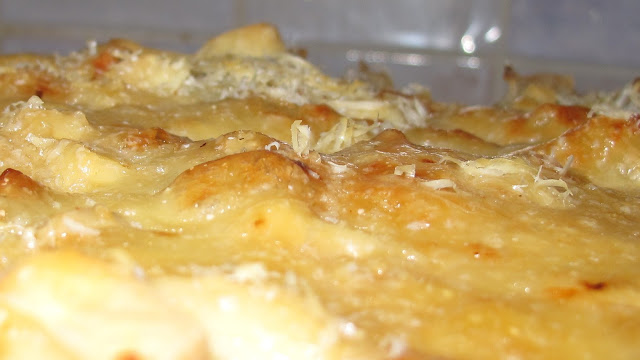 Red Dragon Pie is a classic vegetarian pie. I do feel it deserves wider recognition on Wales’s National Day.
With the added red wine and port to give depth and warmth to this unctuous dish together with the oomph of the extra hot chilli and the wonderful crusty cheese topping-well the result is I have to say, sublime...
Just dip your fork into a succulent sample of this...
But beware of dragons...
Posted by Green Dragonette at 07:25