The Levi Roots Cookery Course-More On The Man, His Faith And Its Link To The Beautiful City Of Bath And Of Course, Delicious Caribbean Food...

I am delighted that people have enjoyed my post about the wonderful cookery day with the charming Levi Roots. As promised, here is a little more about my visit to Bath and, of course, some more recipes...

Bath is a wonderful place to visit-especially arriving in the early morning peace and quiet before all the hordes of tourists flock in... 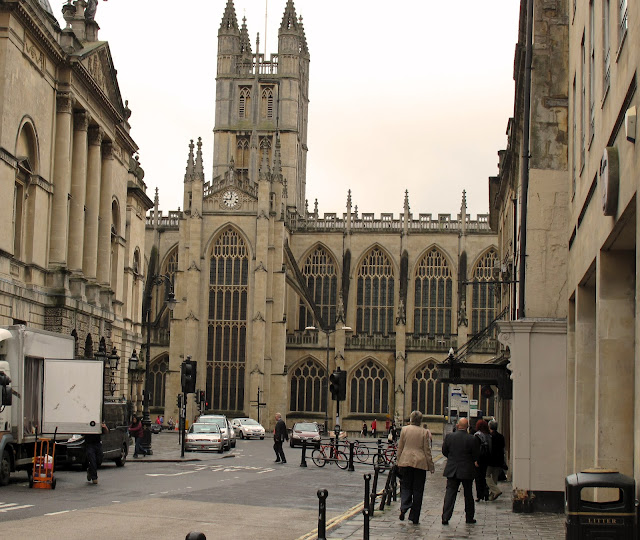 And on the day I visited, there was an added buzz in the air as The University was about to hold a Graduation Ceremony and gradually more and more people in gowns started to appear... 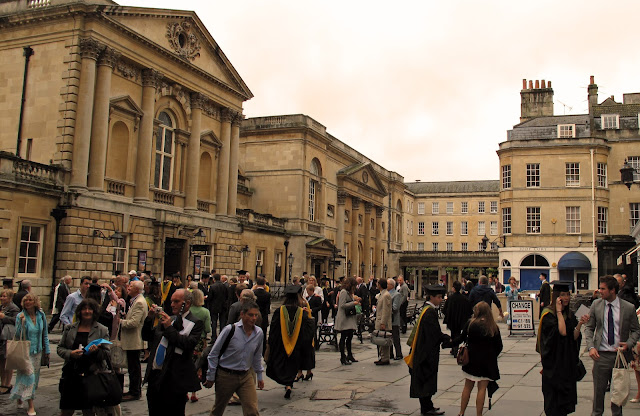 For those people who have never visited Bath, I would earnestly recommend a visit.

Not only is it full of gorgeous Georgian architecture but there are some hidden gems down the little streets and alleyways...

If you look upwards you can spy glimpses back to bygone days now mixed with the modern... 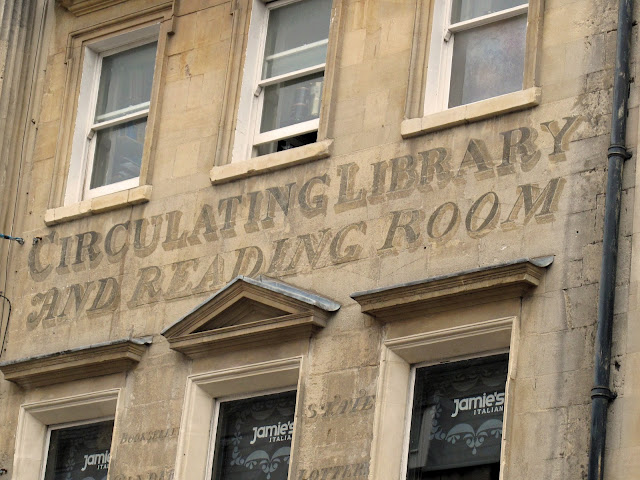 I was intrigued with one wall, 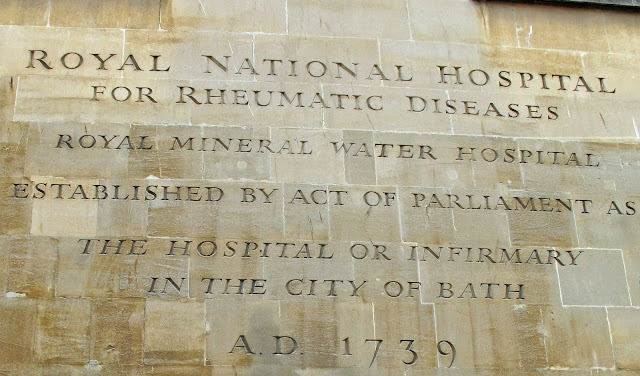 As I paused to ponder, a passing older lady stopped as well and remarked that she was so grateful to the old hospital who she felt had saved the life of her husband many years ago.

She then went on to say that the hospital had a very interesting history...

It was established in 1738 as The Mineral Water Hospital and is still known locally as The Min. Using the Spa water for which Bath is of course famous for, it has treated patients throughout the centuries. Well known for treating rheumatic disorders, skin problems etc., I was however intrigued to learn that the Hospital and its Spa waters were particularly well known in past times for curing a type of paralysis known as Devonshire Colic or West Indian Dry Gripes. This disorder which was prevalent in the 17th and 18th century, seemed to affect mostly farm workers and was actually caused by lead poisoning. Many farm workers at that time were paid in part by pints of Cider for which the West Country was and still is famous for. Unfortunately the cider presses at that time, used lead lined chutes and this resulted in the cider being heavily contaminated with lead. This was actually positively encouraged as the reaction of the lead with the acetic acid of the fermenting apple juice gave a sweeter taste to the cider-in fact some cider makers even hung a lead ball in the vat to increase this effect! Unfortunately it was not realised that people could then suffer from lead poisoning and the resulting paralysis. Poor farm workers were treated at the Hospital as charity cases and after prolonged immersion in the water did seem to miraculously recover...it is now known that long immersions in water be it spa or ordinary water does speed up the body’s ability to excrete lead...

I was very grateful to that passing lady for taking the time to give a stranger a quick history lesson!

But back to Levi Roots.

To start with Levi himself, he is, by his own account a very intuitive cook. Very keen to expand people’s awareness about Caribbean cooking but at the same time make it accessible using ingredients that can be obtained in the UK. I was interested to hear that for a time his Reggae, Reggae Sauce had been produced very near to me in Newport, South Wales. It has since been relocated to production in the north of England and his ready meals are now made in Poland. The Readymade meals produced in distinctive Rasta packaging are now found in a well known British supermarket which has exclusive rights for the first six months for each of his new products. Levi, described how difficult it had been initially to get ‘the men in suits’ to agree to the distinctive Rasta colouring of the packaging and how proud he is now when he walks in to one of their stores and sees his products in all their colourful glory on the shelves. 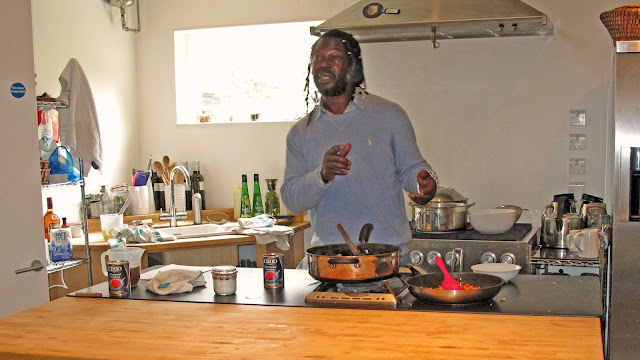 We asked him to tell us more about the Rastafari way of life and I was intrigued to hear that regarding food, many are vegetarians and some are vegans. Other will eat some fish and meat at certain times only.

For more information about the Rasta way of life see

Levi also told us that the City of Bath is very important to those that follow the Rastafari way and many will make a pilgrimage and visit as the most famous person for their faith; Haile Selassie spent his exile years (1936–1941) in Bath at Fairfield House, which he bought.

And now to the recipes –again taken from Levi’s wonderful course at the Bertinet Cookery School... 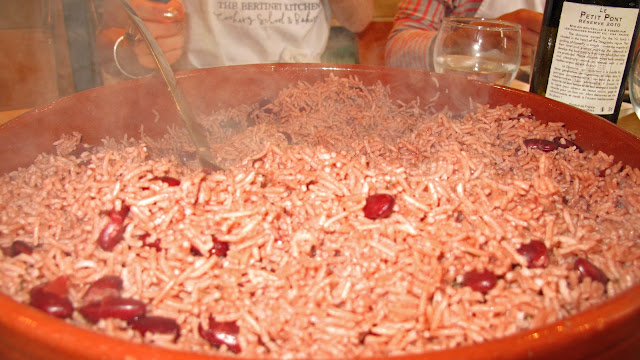 Rice and Peas is one of the most traditional and well known dishes of Jamaica. However it wasn’t until a couple of years ago that I realised that the ‘peas’ mentioned in the title are not actual peas but instead are red kidney beans.

Levi is very much an advocate of using dried beans and not to use canned beans which could contain preservatives and other additives.

This of course means a bit of forward planning...

Next day, drain the beans, but the important thing that Levi emphasized is to not to throw away the soaking water as that will aid the wonderful red colour of the finished dish.

Rinse the beans under cold running water and throw away any damaged ones.

Bring the retained soaking water to the boil and add the beans. Bring back to the boil, cover and boil vigorously for 10 minutes to get rid of the potential poisonous toxins found in red kidney beans. Then reduce the heat and simmer for a further 35 minutes until the beans are really soft-to test give them a gentle squeeze.

The coconut milk will also need to be prepared beforehand.

To make the coconut milk, piece that one hole on the top with a sharp knife which gives way easily and drain and save the liquid.

Once empty, hold the coconut with the holes uppermost and crack smartly on a stone step-I was so pleased I wasn’t going to be resorting to a machete! The coconut will crack easily around the midline.

With a sharp knife carefully run it around between the shell and the white inner flesh. After a couple of circuits you should feel the coconut flesh loosen and fall out in one piece. Repeat on the other half.

Grate the white flesh-at home when I repeated this dish-I used my food processor rather than to do it rather laboriously by hand.

Place the grated coconut in a large bowl and pour over 1 litre of boiling water and stir well.

Add the retained original coconut water. Place to one side for 1 hour.

After an hour add some more boiling water-I added another litre at home. Allow to cool until it is comfortable to handle. Then gently squeeze the coconut pulp in the warm water. Do this for about 5 minutes. I have to say this is wonderfully soothing and your hands will be incredibly soft and coconut scented at the end!

Once you have squeezed away then do one final hard squeeze and remove the pulp and discard. The resulting coconut milk can then be used in cooking. So much better and cheaper than the usual cans of coconut milk!

For the Rice and Peas use about 1 litre of the coconut milk.

Add the litre of coconut milk to the pan of cooked and softened beans together with the salt, butter, whole chilli, spring onion, thyme, garlic and all-purpose seasoning and boil gently for 15-20 minutes with the lid on. For less chilli heat carefully remove the whole chilli at this point. The cooking should have boiled the chilli to release its fruity flavour but by keeping it whole the membrane and seeds which contain the real ‘heat’ of the chilli have not come in direct contact with the rest of the ingredients and will not be eaten. It will still be ‘hot’ but not extreme.

Now to the basmati rice. Rinse twice under cold running water-Levi explained that in Jamaica it is a real insult to your guests if you fail to do this or even mention that you failed to do so.

Add the rinsed rice to the cooked coconut and red kidney bean mix. Make sure the water is 2.5cm/1 inch above the level of the rice.

Cook for another 20-25 minutes on a really gentle heat until all the water is absorbed and the rice is tender. Do not lift the lid during the cooking because you will release all the moisture.

When the rice is cooked, put Clingfilm or foil over the top to seal and cover until ready to serve.

The finished dish should have lovely colour and add a spicy hit to the meal!

This was the spicy and hot seasoning which was added to the griddled vegetables served with the rice and peas and to the chopped and oven roasted vegetables which went into the Veggie Patties. Be warned-it is very hot indeed and a little goes a long way but you could adjust the chilli content to suit. 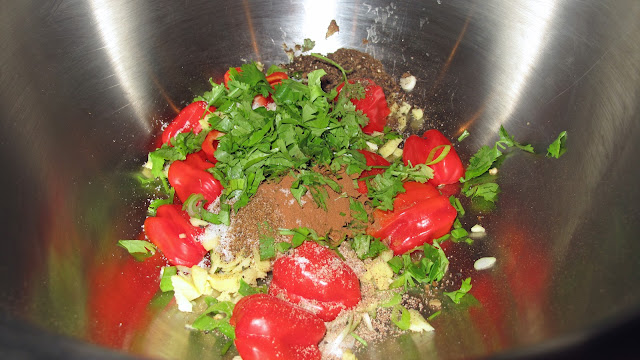 Put all the ingredients except the coriander, salt, pepper and ketchup into a food processor and whiz until smooth. Tip into a large bowl then add the fresh coriander and salt and pepper and ketchup and mix well with a spoon. Allow the flavours to mingle well before using.

NB the spice mix can be stored in an airtight jar in the refrigerator for up to 2 weeks.

If you do find yourself in uncomfortable pain from a seriously hot chilli then Levi recommended peanut butter as the high fat content will help absorb the chilli heat.

I couldn’t finish without showing you one of the fine cheese shops to be found in Bath-appropriately enough called The Fine Cheese Company and just some of its mouth-watering selection...

They very kindly opened up early for me to nip in and buy some of their delicious cheese on the way to the cookery school! 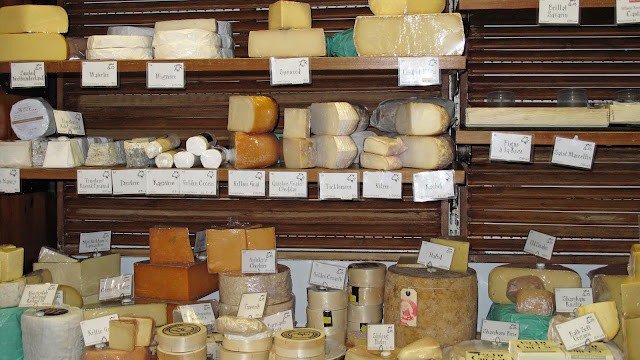 Posted by Green Dragonette at 19:28